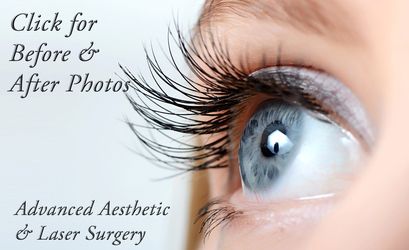 Plastic Surgeons do a variety of things to reduce scarring due to cosmetic surgery, including blepharoplasty. Incisions are typically hidden when possible in natural curves or creases and they are placed along natural skin lines to allow for the best possible scar.

The incision for an upper eyelid blepharoplasty is a curvilinear elliptical shape with the lower margin designed to lie along the natural wrinkle of the upper eyelid leaving the final scar along that normal crease. The amount of skin to be taken out is determined by pinching the skin and pulling it outward until the lid starts to open. Keeping the incision along this natural crease tends to hide the scar which generally heals as a very fine line. Sometimes, this natural fold lies too high and the incision is then intentionally placed lower in an attempt to lower the natural crease to a normal, more youthful position.

The standard incision for a lower eyelid procedure lies within 2-3 millimeters of the lower lid eyelashes and then extends out to the side for a centimeter or so depending on how much work is done and skin is planned to be removed. An effort is made here to place the incision in or along a natural crease in the crow's feet area to hide the scar. As is done with the upper lid, the sutures should be removed in 3-5 days in order to prevent stitch marks. Early suture removal also helps to reduce scarring.

A lower lid blepharoplasty can also be done by placing the incision inside of the lower lid where it rests directly against the eye itself. This is known as a transconjectival approach which leaves no external scar. This procedure is limited in general to fat removal only so it is restricted to patients who do not need skin removed or the muscle tightened. The majority of patients seeking eyelid surgery have excess skin to be removed or benefit from muscle suspension.

The skin is so thin on the eyelids that scarring tends to be very minimal. For this reason, it is rare to see bad scars from eyelid surgery. The skin gets thicker on the nose and in the crow's feet area which is why surgeons try to limit the scars in those areas as well as use natural lines in the temple area when larger amounts of skin removal is necessary

The thin skin on the eyelids also allows for rapid healing of the incisions; therefore, sutures are removed in just a few days to avoid leaving suture marks. In addition, early suture removal also helps to avoid small cysts from forming in the eyeid skin where the stitches penetrate the skin. Tapes (steri-strips) are typically placed over the scars after the sutures are removed to support the incisions and improve their appearance. These should be left in place for several days and are usually secured with a topical medical adhesive.